From its earliest days as a volunteer run crisis youth refuge called Granma’s based in rural Ingleside and opened by Neville Wran, The Burdekin Association has evolved over the years in response to changing ideas about the needs of disadvantaged and homeless youth and those who are at risk of becoming homeless.

Over time, the refuge was handed over to the Manly Warringah Youth Accommodation Association and continued to operate as an eight bed crisis centre. Throughout the 1990s the association also ran Birkley Cottage in Manly providing a six bed therapeutic medium and long-term refuge accommodation, and a Youth Housing Scheme at Dee Why operating 17 beds of semi-supported housing.

Following a review the refuge was closed down in 1997 and the whole service was reorganised and emerged as a unique and innovative service.

In 1998, the Association was renamed The Burdekin Association Inc. after former Federal Human Rights Commissioner Brian Burdekin, AO Brian wrote the 1989 ‘Our Homeless Children’ report which detailed child poverty and abuse in Australia, and criticised governments for failing to look after children in their care.

The Association integrated existing services and developed new programs in response to the report in order to create an accommodation, care and support continuum which is responsive to individual needs of a diverse range of young people (12 to 21 years) and their families.  It involved putting together a range of flexible and innovative programs to support the immediate and changing needs of young people and families. A client-directed case management approach was adopted as well as a strong commitment to team work and cooperation and collaboration with local agencies.

The change of approach allows the organisation to work with more difficult clients, including those with drug dependence, mental illness and self-harming behaviour. The person- centric nature of service provision, combined with a flexibility of approach, a commitment to create solutions greatly enhances the ability to work with challenging young people. Burdekin’s Case Managers work across all program areas giving them the opportunity to develop strong relationships with young people and their families.

The Out of Home Care Program was developed and began accommodating young people in March 1997.  During the same period the Early Intervention and Family Support and Outreach, After Care programmes were trialled.  Collaboration on a range of intra-agency projects were progressing, including the establishment of a pregnant young women and young parents’ accommodation project.  The physical transition of all staff to a central office in Dee Why was completed in November 1997.

By 2000 we were recognised by the Department of Community Services as one of the most progressive supported accommodation services in NSW.

The Association moved into new office premises in Brookvale in February 2004 to accommodate the increase in staff.  We were the second organisation to gain accreditation through the Office of the Children’s Guardian in 2004.  We received a Certificate of Registration as a community housing provider under the Housing Act 2001 (NSW) as a class 4 provider in 2009.

In the 2014 – 2015 financial year we assisted 128 young people and their families, accommodating 74 and providing general support and outreach to the remainder. It is also the year where we held our inaugural Charity Golf Day at Cromer Golf Club and became the lead agency in the Northern Beaches Project – a collaboration of local schools and services with the aim of reducing family breakdown, school disengagement and homelessness. The Northern Beaches Project was launched by the then Minister of Family and Community Services, Brad Hazzard. In 2015 we also secured $90,000 in funding from the Property Industry Foundation (PIF) to renovate Birkley Cottage, the results of which were overwhelming for both the young people and staff.

We partnered with the University of New South Wales in the financial year 2015 - 2016 to develop an outcome measurement tool for our case management and accommodation program. This tool enables us to track the journey of our clients while they are with us; helping us demonstrate and celebrate the success of our young people and guide continuous quality improvement.

2016 saw the retirement of our long term Executive Officer Karen Berman who had been with Burdekin for 22 years!  In the same year Justene Gordon was appointed to fill her shoes. Justene was also honoured with the 2016 Warringah Council Citizen of the Year award.  70% of Burdekin clients enrolled in school or TAFE throughout the year. The other 30% were engaged in employment. We also became community partners with Manly Warringah Sea Eagles and were invited by the Seaforth Arts Festival as beneficiary of the event – partnerships of which we are extremely proud.

2016 – 2017 saw the development of the Quality Assurance Framework funded by the Mary Vernon Foundation. We took a lead role in coordinating training in a successful group program aimed at anger management called ‘RAGE’ (Re-navigating Angry and Guilty Emotions). Expansion of our supported independent living program aimed at those over 18. Set-up of the Youth Advisory Group – YAG and this is the year when the Mounties Charity Race Day raises over $121,000 for Burdekin.

In the financial year 2017 to 2018 Burdekin established the Family Interventions Program with a greater focus on longer term, therapeutic assistance to families, a stronger focus on parents, more diverse means to assist families and so a more diverse number of access points. It is also the year The Avalon Youth Hub is born inspired by Ian Bowsher of Barrenjoey High School who identified the urgent need and led by the Burdekin Association in partnership with numerous other agencies.  We also established the SIL program for young people 16 – 17 years old who need some support while they develop the skills to live independently. Link Housing launches HomeSweet2017 with Burdekin as sole beneficiaries raising over $120,000. The first ever Manly Slash and Dash by Bondi Life Guards takes place. Our CEO Justene wins Premier’s Award Pittwater 2018. Warren Welsh, Housing and Assurance Manager and a long term Burdekin employee is voted Westfield Warringah Mall Local Hero 2018. 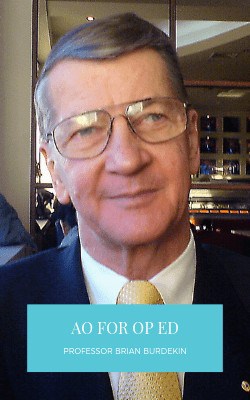 Professor Brian Burdekin, AO has left a lasting legacy to two of Australia’s most disadvantaged groups – homeless children and people with mental illness.  During his term as Federal Human Rights Commissioner, he presented two landmark reports: a National Inquiry into Youth Homelessness in 1989 and Human Rights and Mental Illness in 1983.

Our Homeless Children, the 1989 report on youth homelessness, shocked the Australian public by revealing the number of young people who were homeless and the appalling lifestyle they lived.  The Burdekin Association has restructured to reflect many of the recommendations of the report and Brian Burdekin has offered his full support. Unfortunately, though, many young people are still homeless or at risk of becoming homeless.

Below is the video of our Patron speaking at our recent brand launch.

In March 2019 Professor Burdekin, AO was the keynote speaker for the Youth Homelessness Conference, the first of its kind in two decades. The title of his keynote ‘Youth Homelessness. It’s Been a Long Road’ offers a summary of the key developments in youth homelessness over the past 3 decades. You can read more about the conference here.